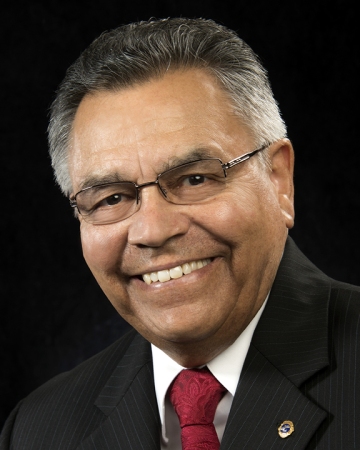 The life of honoree Richard M. Gastellum can be summed up in the motto he helped bring to a challenged Pueblo High School as Principal in 1985: “¡Sí Se Puede!” (“Yes You Can!”). His roots at Pueblo sprouted as an active student, excelling in academics, sports and student government. Richard’s work ethic and determination led to his Class of 1961 graduation in the top 6%, and scholarships to the University of Arizona.

His B.A. in Education led to the start of his teaching career in TUSD, leading students into the intricacies of Spanish before serving in the United States Army during the Vietnam War. At its completion, he chose to return home to Tucson and to serve its students, even continuing on to educate the children of Lafayette, Colorado after his first ‘retirement’.

Throughout his life, Richard has worked to encourage impressionable young minds to embrace education, to participate in extracurricular activities, to be active in Student Government and beyond, and to serve, giving back to the communities that have nurtured them. True to his nature, he serves on the Board of Directors of the Tucson Federal Credit Union, the South Tucson Lions Club, and the Elisa Gastellum Memorial Foundation.

“Mr. G” has spent 49 years teaching, advising, coaching, and building support for his students as an administrator, activist, sponsor and example of what “Yes You Can” is capable of achieving. In a life that has been rich and full of accomplishments both professional and personal, he is most proud of what he helped to build as Principal at Pueblo High School. “¡Sí Se Puede!” came to PHS at a time when hope was needed, and Richard M. Gastellum delivered.